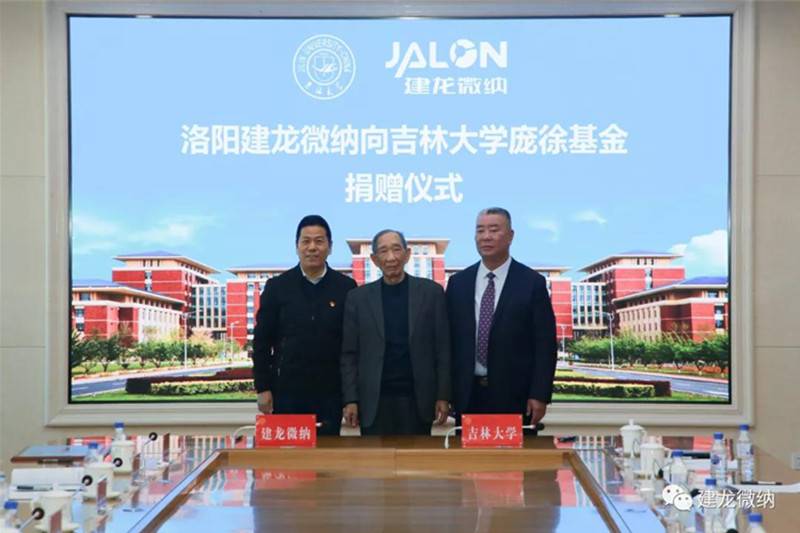 On the morning of December 30, 2020, the donation ceremony of Luoyang Jalon Micro-nano New Materials Co., Ltd. (hereinafter referred to as “Jalon Micro-nano” or the “Company”) to Pangxu Inorganic Synthetic Chemistry Foundation was held in Dingxin Building, Central Campus of Jilin University.

The donation ceremony was presided over by Ning Dekuan, Secretary of the Party Committee of the School of Chemistry of Jilin University, Ruren Xu, Academician of the Chinese Academy of Sciences and founder of the Pangxu Inorganic Synthetic Chemistry Fund, Bian Tie, Member of the Standing Committee of the Party Committee and Vice President of Jilin University, and Yanwen Sun, Deputy Director of the Standing Committee of the Luoyang Municipal People’s Congress and Secretary of the Yanshi Municipal Committee, Zhenkan Li, Deputy Secretary-General of Luoyang Municipal Government, Nongbu Qi, Deputy Mayor of Yanshi City, Jianbo Li, Chairman of Jalon Micro-nano, and more than 30 representatives from other industries attended the ceremony.

At the ceremony, Jalon Micro-nano Chairman Jianbo Li, on behalf of Jalon, donated 5 million RMB to Pangxu Inorganic Synthetic Chemistry Foundation over five years. Bian Tie, a member of the Standing Committee of the Party Committee and Vice President of Jilin University, accepted the donation on behalf of Jilin University and issued a donation commemorative to Jianbo Li.

In his speech, Bian Tie, member of the Standing Committee of the Party Committee and Vice President of Jilin University, expressed his gratitude to Jalon Micro-nano for its strong support to the basic research and application of the inorganic synthetic chemical industry and spoke highly of Jalon Micro-nano’s high-quality development through scientific and technological innovation over the years. Subsequently, the development of Jilin University and the operation of the Pangxu Inorganic Synthetic Chemistry Foundation were introduced in detail.

In his speech, Jalon Micro-nano Chairman Jianbo Li spoke highly of the glorious history of Jilin University and its great achievements over the years. He also spoke highly of Mr. Ruren Xu, an inorganic synthetic chemist, and academician of the Chinese Academy of Sciences, for his selfless family and country sentiments and dedication to education. He expressed his respect for his loyalty and love and expressed his sincere gratitude to Jilin University for its efforts in assisting Jalon in accelerating the transformation of R&D achievements, talent training, technological innovation, and high-quality development during the cooperation and development over the years.

“With the mission and pursuit prospering enterprises with science and technology and serving the country through industry’, this is not only the responsibility of enterprises but also the internal driving force of the national mission.” Jianbo Li said that Jalon Micro-nano hopes to contribute to Jilin University through the actual actions of the company. The Pang Xu Foundation for Inorganic Synthetic Chemistry contributes to the development of the industry, for schools and foundations to carry out innovative research on inorganic synthetic chemistry, and contributes to the advancement of synthetic chemistry research.

Yanwen Sun, deputy director of the Standing Committee of the Luoyang Municipal People’s Congress and Secretary of the Yanshi Municipal Party Committee, said in his speech: When I came to Jilin University to visit, I deeply felt that Jilin University was based on the new development stage, implemented the new development concept, and made achievements in the development of inorganic chemistry. A large number of research results have played an important role in promoting the frontier development of domestic inorganic chemistry and made outstanding contributions. I also learned about the well-known inorganic chemist and academician of the Chinese Academy of Sciences, Mr. Ruren Xu, who has been rooted in Jilin University for more than 70 years. He participated in the establishment and witnessed the development of the School of Chemistry of Jilin University from scratch, from weak to strong. In particular, the Pang Xu Inorganic Synthetic Chemistry Foundation, funded by Academician Xu, has built a cooperation platform, integrated resources from various sources, and made great contributions to the development of synthetic inorganic chemistry and the integration of related interdisciplinary disciplines. The rapid development of Jalon Micro-nano is inseparable from the technical support and selfless help of Academician Xu’s team. The communication and cooperation between the two parties is a successful model of school-enterprise cooperation. Jalon Micro-nano’s charity not only demonstrates private enterprises’ commitment to actively fulfill their social responsibilities but also lays a solid foundation for us to deepen school-enterprise cooperation and win-win cooperation.

Yanwen Sun said that Luoyang is currently in a critical period of accelerating the construction of the sub-central city of the Central Plains urban agglomeration and building the Luoyang metropolitan area, which requires a lot of talent and technical support. It is hoped that this donation can be used as an opportunity to take advantage of Jilin University’s advantages in scientific research, talents, and technology as a national “double first-class” key university, and establish a long-term, stable and efficient in various aspects such as school-local cooperation, achievement transformation, and talent training. The interactive cooperation mechanism of Luoyang has injected strong impetus into Luoyang’s industrial transformation and innovation and development and promoted the common development and progress of both parties.

Finally, Jalon Micro-nano also expressed its heartfelt blessings to Jilin University and Pangxu Inorganic Synthetic Chemistry Foundation and hopes that the joint support and efforts of all sectors of society, will further promote the development and application of domestic inorganic synthetic chemistry and the cultivation of outstanding talents in the follow-up industry. , To cultivate more outstanding senior chemical talents like Professor Pang Wenqin and Academician Ruren Xu. In the future, Jalon Micro-nano will continue to provide R&D technical talents with a full range of software and hardware conditions, provide a better platform for technological innovation of outstanding talents, accelerate the transformation of R&D results, and fully support the basic innovation research and research of new molecular sieve materials in China.